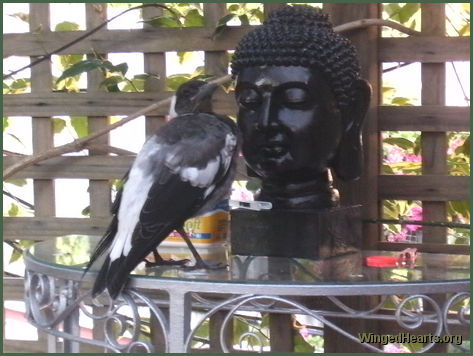 I just love this picture!    Reader Marie De Graaf sent us the pics and story of her lovely birds.   Birds love admiring the scenery and go into a meditational trance several times a day. Here is Marie's story:

Magpies and butcherbirds are regular visitors, amongst other birds, to our backyard and we enjoy their visits.

Sadly, we lost one of our old friends last week.  A male (I think!) who has been visiting us for years was obviously not well and he worsened over three days.  He seemed to know that he was safe in our yard as he stayed around and hid amongst our shrubs.  All we could do was provide water and feed him the little that he would eat.  As soon as he let us, we took him 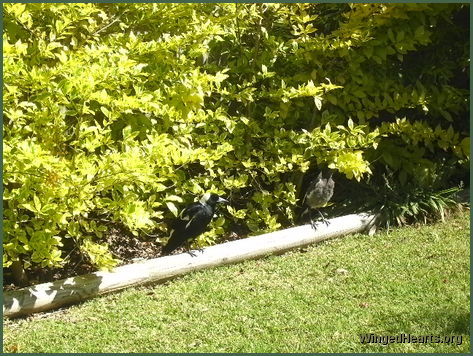 to a vet but, unfortunately, nothing could be done and he was euthanized. When we rang to check on his progress, we were told that he was suffering from paralysis, but no other details.

I've attached a photo of Father Maggie taken two days before he was put down.  After this photo, because we had tried to catch him, he moved further under the bushes and stayed there until we finally managed to grab him.   Because he was ill, he tolerated his offspring and Junior thought it was great to have company and he sat next to his dad for hours!

I wonder how his mate will cope now as they were taking food away, I assume to feed their young.  Will another male step in to claim new territory and another female?  I'm not very knowledgeable on bird lore.

More on Junior, who is a real character!  I would say that he is lonely as he hangs around our yard a lot, sinking down into a 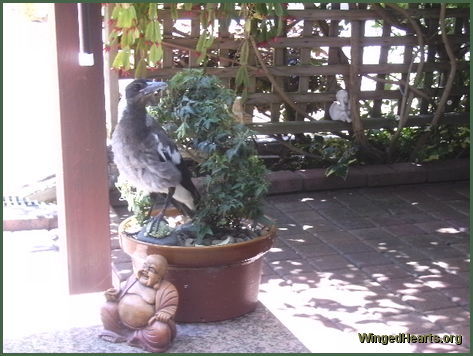 submissive pose whenever other maggies appear.  He is mischievous and loves to pull out plants from pots and he picks-up and drops small ornaments etc.  I provided toys with bells & pegs etc in the hope that he would concentrate on them.  Wishful thinking, as while I often hear Junior making the bells tinkle, he still enjoys destroying plants etc!

I've attached three photos of Junior in three of his favourite spots.  Note the toy hanging from the bench seat - he loves to play with this!  The small table is where he likes to drops things from.  In the early days, I used to keep shells on this table but after several were broken when they were dropped onto the pavers below, I finally woke up and replaced them with pegs and toys.

As Junior gets older, I guess the older maggies will drive him away and he will have to find his own territory and, hopefully, a mate.  We will miss him but think that we will be able to recognise him as an adult from the black spot behind his head. 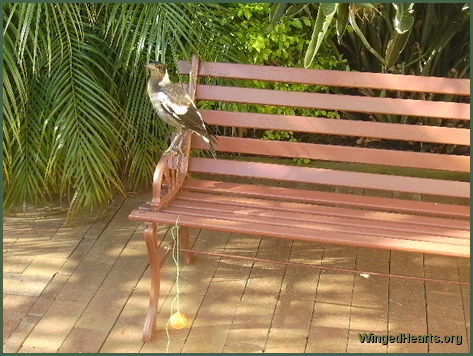 Thank you Marie for your pictures and story. Unfortunately paralysis in the legs I'm informed by vets is quite common amongst magpies and there is no cure. Magpies have complex social structures and intricate inheritance laws.  Ron describes some of our discoveries in his recent blog Magpie Inheritance.  I have also described some in the 23 Aamzing Facts about Wild Bird Culture Series. They are amazing birds and do look after each other much more than humans imagine. --- Gitie

Bookmark/Search this post with
Stories about:
Australian magpies
Species:
magpies