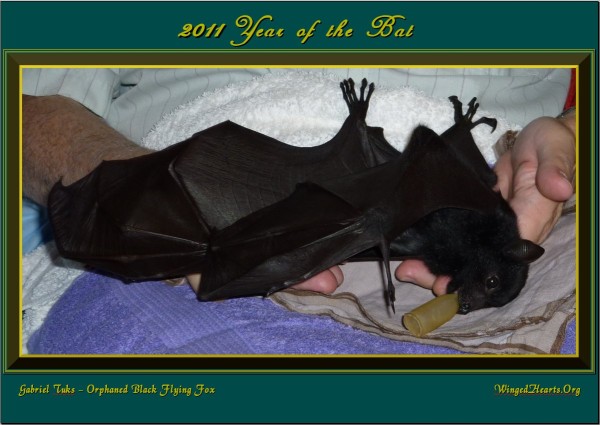 ( click here for for Year of The Bat Posters (free) ) 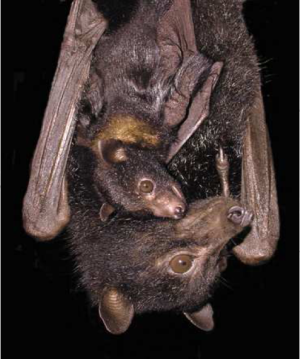 Baby bats CANNOT fly until they are 12-13 weeks old. Many calls for rescue come after a baby has been seen for days and this seriously affects its survival.

(All pictures in this article: courtesy batsqld.org.au and Long Grass Wildlife Refuge)

Bats are among the earliest mammals, experts dating them back to around 50 million years. Cave paintings in the Kimberley's dating back to the last Ice Age which was around 20 - 25,000 years ago feature bats as can be seen in the above image. 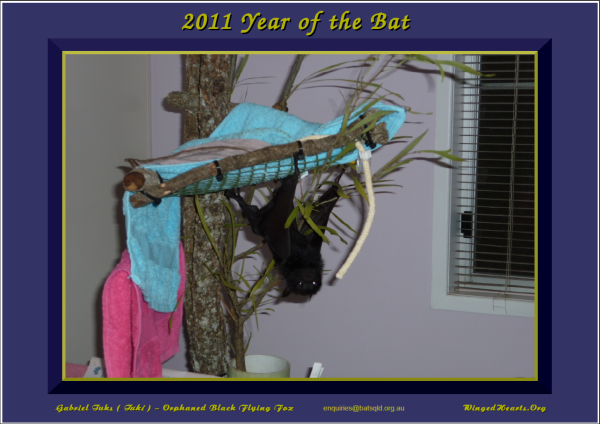 Year Of The Bat - Bats Are Our Allies

Flying Foxes and microbats are a much misunderstood animal and sadly much feared due to misinformation and negative stereotyping in legends and myths.

In reality, bats as they are commonly called (which refers flying foxes and microbats) are the world's only flying mammals and are allies of nature, being the the only pollinators of many species of trees and plants around the world.  Without them the these trees would cease to spread and many other species would also lose their habitat.!  Many species of bats are close to extinction due to loss of habitat and disease.

2011-2012 is the Year of The Bat.   This is an international campaign to help educate the world about the world's only flying mammals.  The campaign will also promote conservation and research efforts around the globe.  The campaign is supported by the United Nations Environment Programme, the Convention and Conservation of Migratory Species, EUROBATS and many partner organisations around the world. See http://www.yearofthebat.org/ for more details.

Dr Merlin D. Tuttle is a leading conservationist who has studied bats for over 50 years. He is also an

award winning photographer and the founder of Bat Conservation International (BCI), which is an organisation dedicated to conservation, research and education of bats.  Merlin's Bats, Angel of Bats and The Secret World of Bats are some of his well known films that have been aired in over 100 countries.

In the article below first published on the Bank Of Natural Capital Dr Tuttle describes the unique role played by bats (please note: the copyright for all the photographs in this article belong to Dr Merlin Tuttle, Bat Conservation International, www.batcon.org).

Bat Pollinators: Tequila and The Tree of LIfe

From Terror to Tourist Attraction

(Republished with kind permission of Bank of Natural Capital)

(Copyright for all the photographs in this article belong to Dr Merlin Tuttle, Bat Conservation International, www.batcon.org)

Were you aware that bats are key pollinators in many parts of the world? Pollination is a vital ecosystem service without which many of our key industries such as agriculture and pharmaceuticals would collapse or incur heavy costs for artificial substitution. TEEB has found that in some estimates, over 75% of the worlds crop plants, as well as many plants that are source species for pharmaceuticals, rely on pollination by animal vectors.1

Bats are the world's only flying mammal capable of sustained flight and are crucial to the survival of our forests.

Flying foxes and Microbats are endangered species. Many babies die every year as their mothers die by falling victim to barbed wires, bird netting, electrocution, wind farms and terrible storms. A baby flying fox cannot survive without its mother because it cannot thermoregulate for 3-5 weeks, feed itself or fly until 12-15 weeks of age.

Thanks to the collossal rescue efforts of the small but highly dedicated  bat rescue groups like Bats Queensland and Long Grass Wildlife Refuge Centre many orphan bats and injured bats have been rescued and rehabilitated.

To celebrate the international Year of the Bat - Winged Hearts.org has created a series of Bats In Care Posters. These posters feature our own Gabriel Tuks - an orphaned black flying fox whom we were privileged to care for in 2009. Tuki as we fondly call him was successfully rehabilitated in March 2010.

You can preview and download the posters below (all free). Please feel free to share widely with your family and friends. We will be issuing a Special Edition on Flying Foxes and Bats in a few weeks' time. All subscribers will receive a free copy. To get your free subscription, enter your name and details in the box on the left hand bar. 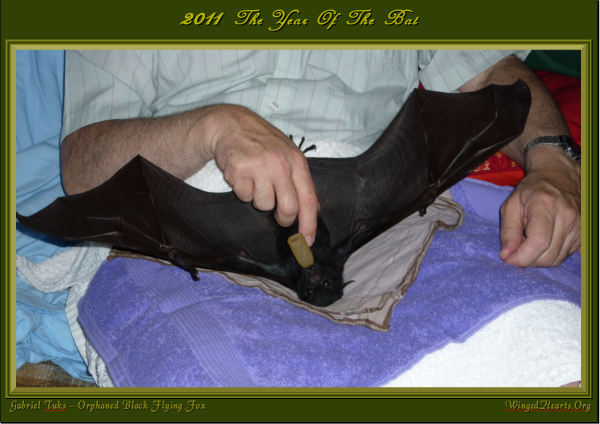